The Breadbin arrives at Hesketh Bank 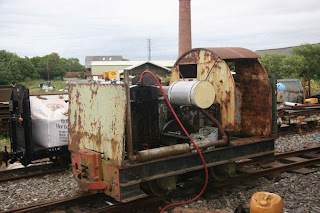 This is Motor Rail 5906, built in 1934. It is a 32/42HP model fitted with a Dorman 2DL engine. It originally worked at Joseph Boam Sands, Middleton Towers, Norfolk. The distinctive "breadbin" cab (with sliding roof) was apparently made in the company's own workshop. People ask why this distinctive shape was used and it seems that one possibility is that the original railway's tunnel had quite restrictive dimensions.

We brought this back to Hesketh Bank last year and have since got everything pretty-much into working order. The major jobs needed were a replacement of the radiator (the existing one being frost damaged and from a different loco) and replacement of the clutch, including lining up the gearbox and engine. This latter step was essential to avoid another clutch being torn apart. The engine and gearbox were over 3mm out of alignment. The maximum tolerance allowed by the manufacturer is 0.075mm.

We have also fitted some proper engine covers and the loco now awaits a good coat of paint and the refitting of its ballast weights to bring it up to its nominal weight of 5 tons.
Posted by Gricer at 22:59 No comments: