Not another Motor Rail at Apedale?

Latest arrival is Motor Rail 8389, delivered ex works from Bedford on 28th March 1947 and supplied to W.G. Turriff Ltd at Leamington Spa as part of an order for three. However, in this case the order was not for the usual 20/28HP Simplex locos, but for 4 ton capacity dumpers, to a design which had much in common with the locomotive, but which was hoped would sustain the company in a world where narrow gauge railways were looking increasingly old fashioned. These early dumpers were fitted with the rugged and reliable Dorman 2DWD engine with standard Simplex clutch and a special gearbox with three forward and one reverse gear in addition to high and low range selection. The Davies detachable tube radiator was also employed, together with the standard Simplex fuel tank. Dumpers were available in both "forward control" and "rear control", the latter being the configuration normally adopted on modern dumpers today. Braking is mechanical, operated by levers and acting on large diameter brake drums on the front wheels.

This particular dumper ended up working at a Stone Quarry at Blakeney-on-Severn, before being withdrawn from service in the 1970s. It first came to the attention of Moseley member Jim Hay in an article in "Classic Plant and Machinery" magazine. When we discovered there was one of these rare machines left, we decided it had to be preserved. A little work has already been done to the hubs, brakes, radiator and fuel tank, but the engine is currently out for checking over and return to operation. Watch this space! 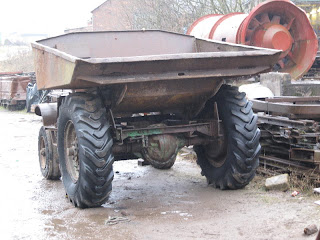 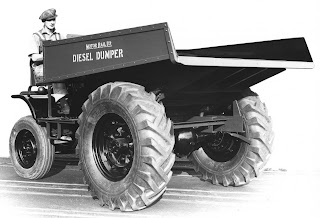